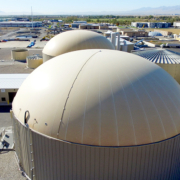 The Wasatch Resource Recovery digester is collaborating on a residential food waste pilot with Momentum Recycling.

Starting November 5, Momentum Recycling will begin collecting residential food waste weekly from up to 100 households in the Liberty Wells neighborhood in Salt Lake City, Utah. “It is a free 3-month pilot funded by a grant from Intermountain Healthcare that begins November 5 and ends on January 28,” explains Lexi Passmore, Momentum Recycling’s Marketing Coordinator. “Our goal is to see if we can offer this service on a permanent basis. We will be assessing the level of participation, the households’ willingness to pay for the service after the pilot, and the amount of food waste diverted from the landfill.”

The Wasatch Resource Recovery anaerobic digestion facility in North Salt Lake City began receiving food waste in 2019. It operates under both wastewater and solid waste permits. The facility includes two 2.5 million gallon continuous stirred tank reactors (CSTR), a tank to receive fats, oil and grease (FOG), and a hydrolysis tank that feeds the digesters, which operate at mesophilic temperatures. The first phase of the project is designed to process 180,000 tons/year of source separated organics; the second phase will increase the capacity to 250,000 tons/year. Phase I is rated to generate up to 3,000 dekatherms a day of renewable natural gas (RNG). “We began injection into the Dominion natural gas pipeline, which is adjacent to the plant, in December 2020,” notes Elizabeth Barrett, WRR’s Procurement Manager. “Currently, we are receiving around 400 to 450 tons/day of various food waste streams.” 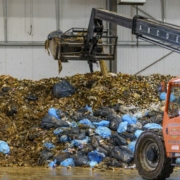 Specifically, the food you plan to throw in the trash. They will take your rotten vegetables, dinner remnants, even chicken bones.

About a quarter of all trash that heads to the landfill is food waste, according to the Environmental Protection Agency, so diverting food to the digester could make a big difference.

In the landfill, those food scraps would normally put off a lot of atmospheric greenhouse gasses during decomposition. Instead, the machines capture and clean the gas produced from food waste to sell as natural gas to energy companies.

You can drop off food waste at WRR in North Salt Lake, but now, with a grant from Intermountain Healthcare, the company will test out a curbside pickup program as well. 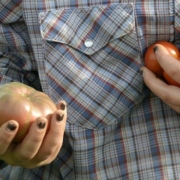 But what will they do in a few weeks, when the harvest fills the kitchen counter and exceeds what they can put in their refrigerator — or stomach?

Instead of tossing those extra fruits and vegetables, consider donating them to those in need. In Utah, 355,550 residents are currently facing hunger, according to national statistics from Feed America.

While many organizations across the Salt Lake valley accept non-perishable food, only some have the capacity to store garden produce.

Here are five Utah organizations that can accept and distribute your surplus harvest.

Read the full Salt Lake Tribune article here!  Be sure to check out the section about ‘What to do when produce is too ripe to donate’. 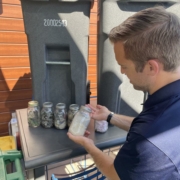 OGDEN — Recycling isn’t just about setting aside the empty aluminum cans and cardboard generated in your home.

Restaurants can do their part, and a pair of private recyclers are reaching out, hoping to get Ogden-area entrepreneurs to keep the empty bottles and food scraps they generate out of the landfill. Reps from Momentum Recycling, a glass recycler, and Wasatch Resource Recovery, which turns food scraps into methane gas, traveled on Monday to Ogden to spread the word about their services.

James Soares, who as chief operating officer for Lotus Craft helped pull the event together, is a big booster of the possibilities.

If the cost for businesses of recycling their glass and food scraps isn’t less, “it’s not a whole lot more” than just sending the material to the landfill, he said. “There’s so much upside to making that stretch.” Lotus Craft helps operate Ogden River Brewing, where Monday’s gathering was held. 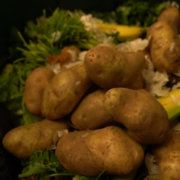 “It’s fairly immoral to waste this much food,” sustainability manager Morgan Bowerman said. “Because we waste all this food while one in six adults in the U.S. are food insecure.”

She says reducing waste and feeding the hungry should be our first priorities, but food waste is still inevitable. When it goes to the landfill, it’s harmful for the environment.

“Putting food waste into the landfill is really inefficient use of our resources,” Bowerman said. “All of that food waste is going to break down and is going to release into our atmosphere and create a really potent greenhouse gas. Or we could capture it with anaerobic digestion technology.”

Anerobic digestion refers to breaking down food without oxygen. The process – which happens naturally in a landfill – creates methane, which is 25 times more potent than carbon dioxide according to the Environmental Protection Agency. But what if you could take that methane, and convert it to a renewable energy source?

Read the full article and watch the video here! 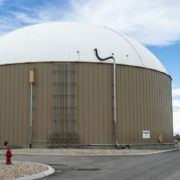 Don’t throw them in the trash.

That icky, spoiled foodstuff can now go to Utah’s giant food digester, where it will be turned into renewable natural gas and nutrient-rich soil.

The food scraps can be dropped off — for free — just inside the facility gates at 1370 W. Center St., North Salt Lake.

Utah’s first anaerobic food digester revved up two years ago. Since then, this giant beast has been taking food waste from grocery stores, restaurants and other commercial food operations. (As well as 275 cases of beer from state liquor stores in 2019.)

The food is then transformed into natural gas and fertilizer.

The public drop-off service has been something the facility has wanted to offer since opening, sustainability manager Morgan Bowerman said in a news release.

Food sent to landfills, she said, does not break down as quickly as one might expect because it is not exposed to enough oxygen. And food that degrades slowly releases methane — a harmful greenhouse gas — into the atmosphere.

“We hope this will really take off,” she said of the public drop-off site, “and residents will embrace the opportunity to send us their food waste.” 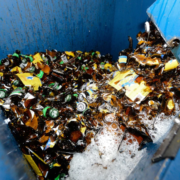 North Salt Lake • The state agency charged with distributing and selling alcohol in Utah has disposed of thousands of gallons of drinkable beer worth almost $18,000.

On Friday — which was the unlucky 13th for people who hate to see beer get tossed — the Utah Department of Alcoholic Beverage Control transported 275 cases of bottles and cans from its Salt Lake City warehouse to Wasatch Resource Recovery in North Salt Lake. The products, DABC officials say, could no longer be sold in state-run liquor stores because of a new law that took effect in November.

Once the DABC shipment arrived, crews at the Davis County facility put the glass bottles through a depackaging process, sending the liquid ales and lagers into an aerobic digester — where they will mix with other food waste — and eventually be turned into natural gas and fertilizers. 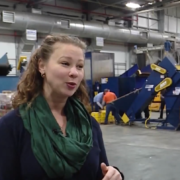 NORTH SALT LAKE, Utah – Hundreds of cases of beer have been dumped down the drain in Utah as the Department of Alcoholic Beverage Control clears out their supply.

A self-described beer man himself and employee at Wasatch Resource Recovery, Braeden Adamson can relate to the pain of dumping beer.

However, the destruction of the beer was required by law. The Department of Alcoholic Beverage Control can no longer sell Utah’s 3.2 Beer at state liquor stores since being replaced with 5.0.

“With the new law, it’s time for a change,” said Adamson.

Read full article, and watch the video on KSL! 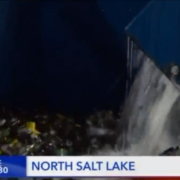 SALT LAKE CITY — The Utah Department of Alcoholic Beverage Control destroyed a lot of beer Friday — in the name of obeying the law.

But all this beer from state liquor stores that used to be too strong for grocery stores isn’t just going down the drain. It’s being turned into methane gas and sold, while the glass and cardboard are recycled.

Wasatch Resource Recovery doesn’t just take in beer — they take in about 500 tons of food every day. So even destroying a whole state’s worth of old beer, to them, is nothing.

The DABC had to get rid of the beer because selling it would be illegal — the government is not allowed to compete with private businesses like grocery stores that now sell stronger beer.

Watch the video here on Fox13! 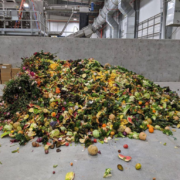 Wasatch Resource Recovery in North Salt Lake, Utah, is already taking in more than 350 tons of food waste every day, and it’s only at half capacity. While it started taking some food in February 2019, Morgan Bowerman said that the last few pieces of the facility will be in place in the next few weeks and the facility will be ready to take on more waste — and produce more natural gas.

Bowerman is the sustainability and resource recovery manager at the facility, and she said Wasatch Resource Recovery ’s anaerobic digesters work using microbes.

See the products of Anaerobic digestion!

Wasatch Resource Recovery in the Media

Stay up to date on what we're working on. Subscribe to our free e-mail newsletter!

What is anaerobic digestion?

What can you put into an anaerobic digester?

How does food waste impact our air quality?